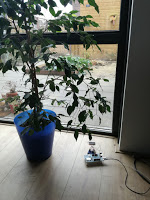 This is the log of my recent experiment on the viability of solar powering of an IoT device in a semi-indoor environment (indoor, but bright enough to enable a plant growing, e.g. by a window). I basically wanted to find out what is the absolutely minimum power that can be squeezed out from a tiny 53x30mm, 5V, 30mA solar panel. The measurement took place in the Netherlands between January 10-26, when the amount of sunshine is the lowest in the year.

Because I did not have a real load on the solar panel, a just measured the short-circuit current and the no-load voltage as an indication of the generated energy. The current was measured by an INA219 device and was logged by an Intel Edison Arduino Breakout Kit, the voltage was simply measured by one of the analog pins of the Edison (the used software is available at GitHub). 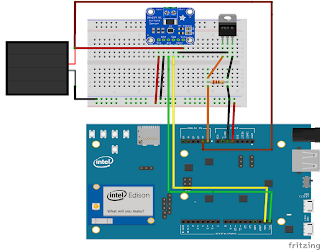 During the measurement, the solar panel never gave more than 4V or 0.5mA, and it generated approximately 10 mA all together in this two weeks period. 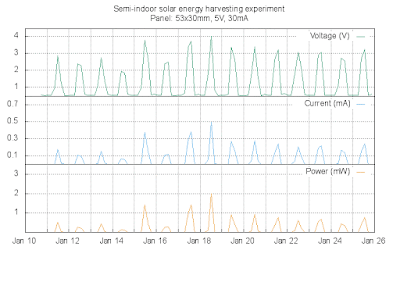 The result sounds absolutely terrible regarding that the panel could generate 30mA in ideal conditions. However, this is an absolutely worst case scenario, and it still would generate 20 mA a month, 240 mA a year (probably it gives this amount of power during a sunny summer day). In theory, this is certainly enough to charge e.g. a 150 mA LiPo battery in a year, which sounds ridiculous, but can be acceptable for many low power applications.

Reality can be quite different though. The solar panel gave really small amount of power, a way below 1 mA. The question is if it is enough to drive a LiPo charger chip, and how much energy the chip itself uses up… In a next post I try to find a solar harvesting chip with a very low quiescent current to see how much of the generated energy can be actually stored in a battery.

For what project would you like to use solar harvesting?