I have been working recently on a simple Haskell SVG to G-Code converter, and I realized, that in spite of the simplicity of the algorithm at the end, how confusing the subject is (partly because of some not very well written research paper(s) delivered by google search on the subject).

The algorithm explained in this post is implemented in C# and can be found at my GitHub repository. The C# code is only for illustrating the algorithm, later on it will be integrated with my Haskell SVG to G-Code project.

The article assumes that you understand basic algebra and geometry, complex numbers, etc…

This algorithm works on bezier curves without any inflection points. Thus, as a preliminary step, the inflection points must be found and the curve must be split (the parts will be approximated one by one). It is a simple task though. We just have to find the points where the second derivative of the parametric equation of the bezier curve becomes zero. It is a quadratic equation, so that can happen at no more than two points. Obviously, we will be interested in the real (not complex) solutions only and only which are in the [0,1] interval. For the details please contact with the implementation. 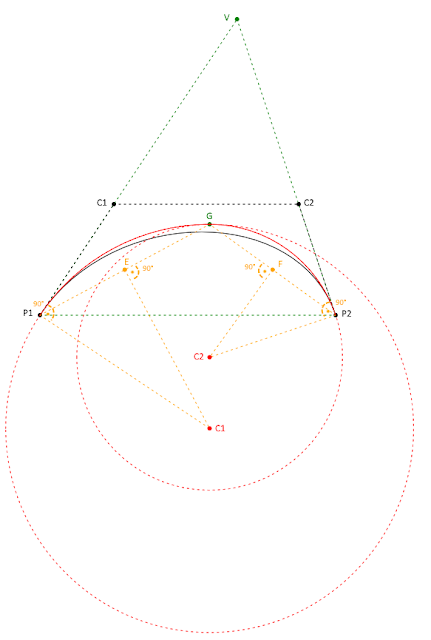 To be done, we need to find C1 and C2, the center points of these circles.

It is simple. We know the tangent at P1. C1 lies on the line which is perpendicular to this tangent and goes through P1, let’s denote it by P1C. If we take the section between P1 and G, its perpendicular bisector (EC1) intersects with P1C at C1. The same method can be used to find C2.

Estimate the error and go recursive

Obviously, as you can also see on the illustration, most of the time the approximation is not close enough. Thus, after approximation, the error must be estimated, and if it is out of the tolerance range the bezier curve must be split, then the two new bezier curves must be approximated recursively until you reach an acceptable deviation. In my implementation I just simply check the distance at a certain number of points along the curve and split if the maximum deviation is not acceptable (the bezier curve is split where the deviation is the maximum as suggested by [2]). This is certainly not fast, but acceptable for my purposes.

For what project do you want to use bezier approximation?