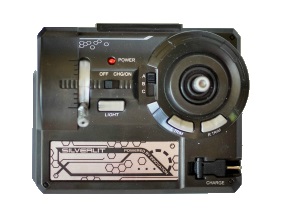 My kids received a Silverlit Falcon Nano toy helicopter for Christmas. It is a fantastic contraption, but it is certainly not for small kids, especially that there are no spare parts available. Long story short, it went broken before they actually learned how to fly it properly. The actual helicopter is nice enough to hang it from the ceiling of the kids’ room, but I also felt sorry for the remote controller as it actually looks very decent compared to the usual chinese RC toys. Thus I decided to reuse it for one of my future projects.

A brief research told me that the actual IR signal is travelling on a PWM carrier pulsing at a carrier frequency of (usually) 38KHz; it is nicely explained in details at adafruit. Fortunately, common IR receivers, like what I purchased, TSOP38238, can turn such a PWM signal (top one on the following image) into regular digital one (bottom signal):

Note: I take the opportunity to give here some practical advice about TSOP38238: you probably want to use some bypass capacitor close to the receiver. I had serious issues when a servo was attached to the same power rail than the receiver. I could solve this issue by using a huge (1000 µF, likely too big, but I did not have smaller) bypass capacitor. The TSOP38238 datasheet also recommends to use a bigger than 0.1 µF bypass capacitor along with a resistor of 33 Ω -1 kΩ for protection against electrical overstress.

The IR receiver just passes the raw data along, it still needs to be decoded. Decoding means that you take the length of the zeros and ones and try to find out the meaning of the signal by this timing information. Most of the time these signals implement some kind of well-known protocol (it is usually the case with traditional remote controllers) and can be easily decoded; sometimes we can assign a unique hash number to a given signal without any knowledge of the actual protocol. Sometimes, like in this case, the protocol must be reverse engineered.

The following picture illustrates the the NEC protocol to give you the basic idea how such a protocol looks like:

I was concerned about whether automatic hash generation could be useful in this case. It is not a traditional remote controller after all, you are supposed to push multiple buttons in the same time, not to mention that you want the values of the joysticks as consecutive - and not random - numbers.

Still, I gave it a go using the Arduino IRremote library; I thought it might be smart enough to recognize the protocol or to generate values from the signals where the individual values of the buttons and joysticks can be read as bit fields.

I ran the IRrevDemo example application, but the result was very disappointing. I got the following numbers when I should have got the same ones:

I did not have any choice, but to have a look at the timings and reverse engineer the protocol (I was not completely clueless, though, as I found this Silverlit protocol description, which gave me a basic idea about what to look for). This time I ran the IRrecvDumpV2 example; it provided every kind of useful information, but most importantly the timings.

The followings are two typical readings representing the same value. The number in the square brackets shows the length of the signal, the numbers annotated with + and - are the lengths of the consecutive 1 and 0 signs (+ annotates 1s, - annotates 0s) of the signal in nanoseconds.

There is quite a bit of fluctuation in the numbers, but we can make some observations that helps with the decoding:

According to these, I modified one of the example programs a bit. The gist is in the decodeNano method:

Using this method I finally got stable values. The next step was to find out which bits are related to which buttons or joysticks. It is very simple, you basically just push buttons one by one and try to identify which bits are changed in the result. At the end, I came up with the following bit pattern:

Finally, I developed some helper functions to read the bit fields and shift their values when necessary (e.g. set the origins for the joysticks):

Tell me if my case helped you to reverse engineer other controllers!